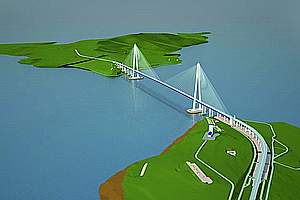 For all involved this is a project of superlatives: Having the APEC Economic Summit 2012 in view, Russia builds the world’s longest cable stayed bridge from Wladiwostok over the Eastern Bosporus to the Russki I ... [more]

The Russky Bridge (Russian: Русский мост, Russian Bridge) is a cable-stayed bridge in Vladivostok, Primorsky Krai, Russia. The bridge connects the Russky Island and the Muravyov-Amursky Peninsula sections of the city across the Eastern Bosphorus Strait, and with a central span of 1,104 meters (3,622 feet) it is the longest cable-stayed bridge in the world. The Russky Bridge was originally built to serve the 2012 Asia-Pacific Economic Cooperation conference hosted at the Far Eastern Federal University campus on Russky Island. It was completed in July 2012 and opened by Prime Minister Dmitry Medvedev, and on September 3, 2012, the bridge was officially given its name.

The bridge to Russky Island is the world's longest cable-stayed bridge, with a 1,104 m (1,207 yds) long central span. The bridge also has the second-highest pylons after the Millau Viaduct and the longest cable stays.

The design of the bridge crossing has been determined on the basis of two primary factors:

The pylons were concreted using custom self-climbing forms in pours of 4.5 m (15 ft). A crane was used on the first three pours, afterwards the formwork was completed unaided moving through the hydraulic motion of modular elements. The pylons are A-shaped, therefore, the use of standard forms was not feasible. An individual set of forms was arranged for each bridge tower. The transition between section types was carried out at summer levels at the elevations of 66.26 m (217.4 ft) and 191.48 m (628.2 ft). The use of self-climbing forms made it possible to achieve better quality and decrease the time of construction of cast-in-situ reinforced concrete structures by half as much again. The cable stays anchorage zone starts at 197.5 m (648 ft). The installation of cable-stay pairs and casting of bridge tower bodies was carried out simultaneously, dramatically reducing the construction period.

The span structure has an aerodynamic cross-section to assume squally wind loads. The shape of the span cross-section has been determined based on aerodynamic design and optimized according to the results of experimental processing of the scale model in the detailed design phase.

Large-sized prefabricated sections for the installation of the central span were delivered by barges to the erection site and hoisted by a crane to a 76 m (249 ft) height. Here, the elements were abutted and cable stays attached to them.

A cable-stayed system assumes all static and dynamic loads on which the very existence of the bridge depends. Cable stays are not designed to endure the entire lifetime of the bridge, but they are repairable and have the best possible protection from natural disasters and other adverse impacts.

Parallel strand stay (PSS) cable stays consist of parallel strands of 15.7 mm (0.62 in) diameter; every strand consists of seven galvanized wires. Cable stays incorporate from 13 to 79 strands. The length of the shortest cable stay is 135.771 m (148.481 yds); the longest, 579.83 m (634.11 yds). The protective housings of the cable stays are made from high-density polyethylene (HDPE) and have the following features: UV resistance; resistance to local climate conditions of Vladivostok (temperature range from –40 to +40 °C; –40 to +104 °F) and environmental aggressiveness.

Comparison of the side elevations of the Russky Bridge and some notable bridges at the same scale. (click for interactive version)

The costs and the fact of the construction of the Russky Bridge are widely criticized by the Russian political opposition. In January 2007, Vladimir Putin, then-President of Russia, stated that holding a summit in Vladivostok is a distinct possibility, and that at least 100 billion rubles would be required to prepare the city for the summit, which, at the time, was three times more than the provincial budget of Primorsky Krai as a whole. As of 2012[update], the cost of construction was expected to surpass $1 billion USD, and the project description on the site of the general contractor did not list project costs. Additionally, the built-in capacity of 50,000 cars per day is ten-times the existing population of Russky Island at only 5,000 inhabitants, leading to severe under-usage.

There had previously been criticism that the paved road had ended in a dead-end, a short distance beyond the bridge, during the first year after it was built. The paved road network has since then been expanded. As of 2018, the road covers the entire Sapper peninsula, about 25% of the total area of the island.

Text imported from Wikipedia article "Russky Bridge" and modified on 11 February 2021 according to the CC-BY-SA 3.0 license.