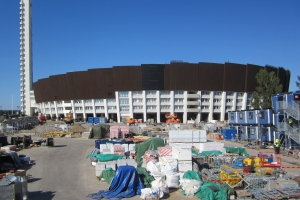 The listed Olympic Stadium in Helsinki is being modernized which includes the addition of a new roof that covers the stands around the entire oval. This required the development of new bearings that can transfer both compressive and tens ... [more]

The Helsinki Olympic Stadium (Finnish:Helsingin Olympiastadion; Swedish:Helsingfors Olympiastadion), located in the Töölö district about 2.3 kilometres (1.4 mi) from the centre of the Finnish capital Helsinki, is the largest stadium in the country, nowadays mainly used for hosting sports events and big concerts. The stadium is best known for being the centre of activities in the 1952 Summer Olympics. During those games, it hosted athletics, equestrian show jumping, and the football finals.

The stadium has been closed since March 2016 for renovation works and is scheduled to open in August 2020.

Helsinki Olympic Stadium in 1938 soon after its completion. The stadium, first built for the 1940 Olympics, had to wait until 1952 for its intended use as an arena for the Olympic games as the war led to the cancellation of the event.

It was the venue for the first-ever Bandy World Championship in 1957.

The stadium was completely modernized in 1990–1994 and also renovated just before the 2005 World Championships in Athletics.

In 2006 an American TV series, The Amazing Race 10, had one of its episodes ending at The Olympic Stadium Tower. As a task, teams had to do a face-first rappel (known as the Angel Dive) down the Helsinki Olympic Tower.

Since March 2007, a Eurasian eagle-owl has been spotted living in and around the stadium. On June 6, 2007, during a Euro 2008 qualifying match, the owl delayed play by ten minutes after perching on a goalpost. The owl was later christened Bubi and was named as Helsinki''s Resident of the Year.

The tower of the Helsinki Olympic Stadium, a distinct landmark with a height of 72.71 metres (238.5 ft).

The tower of the stadium, a distinct landmark with a height of 72.71 metres (238.5 ft), a measurement of the length of the gold-medal win by Matti Järvinen in javelin throw of 1932 Summer Olympics, is open for visitors and offers impressive views over Helsinki. It is possible to see into the adjacent Telia 5G -areena.

A Youth Hostel is located within the Stadium complex.

Text imported from Wikipedia article "Helsinki Olympic Stadium" and modified on 20 April 2020 under the CC-BY-SA 3.0 license.