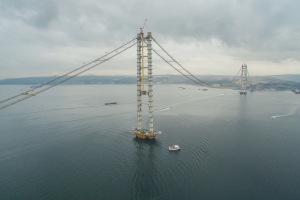 The suspension bridge with the fourth longest main span in the world is currently being erected over the Izmit Bay. A particular challenge is the location. The drawn-out bay is situated in one of the world's ... [more] 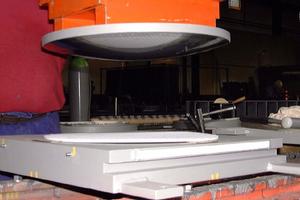 The Osmangazi Bridge (Turkish: Osman Gazi Köprüsü) is a suspension bridge spanning the Gulf of İzmit at ist narrowest point, 2,620 m (8,600 ft). The bridge links the Turkish city of Gebze to the Yalova Province and carries the O-5 motorway across the gulf.

The length of the bridge will be surpassed by the Çanakkale 1915 Bridge, under construction across the Dardanelles strait, which will become the longest suspension bridge in the world upon completion scheduled for 2022.

Construction and operation of the bridge was awarded to a joint venture (NOMAYG JV) formed by five Turkish companies (Nurol, Özaltın, Makyol, Yüksel and Gocay) and one Italian construction company Astaldi following the international Build–operate–transfer tender that took place in April 2009. In 2010, a contract was signed for the project that was estimated to cost ₺11 billion for the entire highway from Gebze to Bursa.

On 30 March 2013 Prime minister Recep Tayyip Erdoğan laid the ground stone for the bridge. After the completion of the bridge, the distance between Istanbul and İzmir shortened by about 140 km (87 mi), bypassing the lengthy distance around the Gulf of İzmit. The 420 km (260 mi) highway and bridge reduced the travel time between the two major cities from six-and-half hours to three-and-half hours. The bridge and connecting highway provides three lanes of traffic in each direction. Construction was completed on 30 June 2016.

The US$1 billion privately financed bridge was awarded to the Japanese firm IHI Infrastructure System Co. On 16 July 2011 as EPC basis with FIDIC Silverbook contract. IHI, which was one of the contractors of second Bosphorus bridge, also completed the seismic reinforcement projects for Halic and Mecidiyekoy viaducts. IHI subcontracted the design works to Danish engineering design firm COWI A/S, which collaborated for the aesthetic design with Dissing+Weitling. Notice to proceed was given by NOMAYG JV to IHI on 1 January 2013 and the expected total project duration was 37 months.

The 34,000 tons of steel used to build the bridge was obtained from ArcelorMittal Galaţi, Romania.

The bridge is fourth longest suspension bridge in the world.

On 21 March 2015 a catwalk broke away from ist bolted joint cable on the south tower during the construction at the bridge and fell into the water. Added in February 2015, the catwalk was needed to allow workers access to the other side of the bay. No one was harmed by the accident as work was interrupted at this section due to windy weather. Marine traffic to and from İzmit Bay was suspended following the accident for security reasons and resumed after recovering the cable in the morning of 23 March.

Kishi Ryoichi, the 51-year-old Japanese engineer of the IHI-Itochu Consortium, who was in charge of the construction at site, committed suicide after the accident. He was found dead at the entrance of a cemetery near his lodging in Altınova. He left a note saying that "…this failure ends my private and professional life. This project was mine and my country's pride. No one else is responsible for this failure."

Text imported from Wikipedia article "Osman Gazi Bridge" and modified on 24 February 2022 according to the CC-BY-SA 3.0 license.