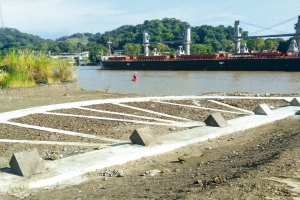 Since 2007, work has been underway on the most comprehensive expansion in the history of the Panama Canal. In the meantime, this project is nearly completed. In addition to a third set of locks, it also incl ... [more] 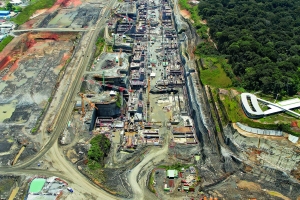 Expansion of the Panama Canal completed

The expansion of the second most important waterway in the world is finished. Since the end of June 2016, large container ships can now also pass through the around 80 km long Panama Canal which connects the Pacific with the Atlantic. Fo ... [more]

Expansion of the Panama Canal: Completion within reach

With the flooding of a canal section in June 2015, tests have begun in readiness for the scheduled opening of the expansion project in 10 months time. Since 2011, PERI has delivered around 1,100 containers of formwork and scaffolding mat ... [more] 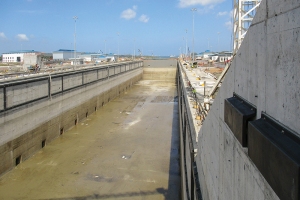 Repair of sills in the Panama Canal

The canal includes Gatun Lake, an articifially created body of water with a surface of 425 km².

There are three locks: Gatun Locks, Pedro Miguel Locks and Miraflores Locks. Each hall or chamber in the locks is 304.80 meters long, and 33.52 meters wide.

Cort Gaillard or Corte Culebra is a large ditch made by human workers 14.5 km in length.

Ships usually take about 8 to 10 hours to pass through the canal. The naval distance between New York and San Francisco was around 26 000 km before the construction of the canal (by way of Cape Horn), after the opening of the canal, this was reduced to roughly 10 000 km.

Officially, 5609 workers died during the construction of the canal.

Due to the size restrictions in the locks, only about 60% of sea-going vessels are able to pass through the canal. However, many ships have been designed specifically to be able to pass through the canal fully loaded and with maximum payload. These are classified as Panamax class ships. The defining dimension are 294 meters in length, 32.3 meters in width and a draft of 12.04 m. By current standards these are mid-sized ships. Updating of the locks to fit larger vessels is still under consideration.