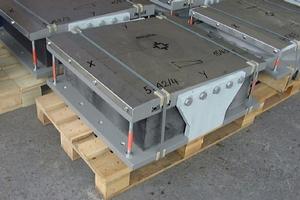 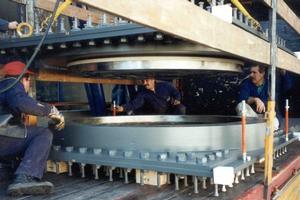 mageba Pot Bearings are durable bearings that can be used in many situations, whether in big or small bridges, or a variety of engineering structures.

The Uddevalla Bridge (Swedish:Uddevallabron) is a cable-stayed bridge crossing Sunninge sound near Uddevalla in the province of Bohuslän on the west coast of Sweden. The bridge was constructed as part of the rerouting of the European route E06 outside Uddevalla, which reduced traffic congestion in the city and shortened traveling distance by 12.8 km (8.0 mi).

The cables are steel and the deck is composite steel-reinforced concrete, while the pylons are reinforced concrete. About 9,000 t (20,000,000 lb) of structural steel and 35,000 m³ (1,200,000 cu ft) of concrete were used. The bridge and the connecting Sunningeleden cost of SEK 900 M (USD 111 M) in 2000 currency values. There is a problem with ice sticking to the cables in the winter, which can fall onto cars. The bridge has to be closed a few times per year for this reason. The alternative road is 12.8 km (8.0 mi) longer. Civil engineers have tested PETD (a way to use a burst of electricity to remove ice caked on walls or windows. For surfaces coated with a special film, the jolt gets rid of ice in less than a second, far less time than it takes to hack at it with an ice scraper).

Text imported from Wikipedia article "Uddevalla Bridge" and modified on 22 July 2019 under the CC-BY-SA 3.0 license.