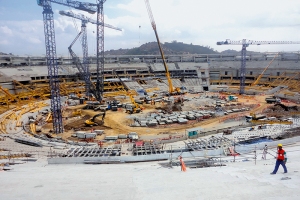 The Maracanã Stadium in Rio de Janeiro, Brazil, was built for the Soccer World Cup in 1950. At the time, the oval stadium, consisting of precast concrete, had the world's largest cantilever roof with a span ... [more]

Design of the roof structure

The boundary conditions of the new roof design were set by the required roof depth of almost 70 meters and the continued use of the existing concrete substructure to transfer loads from the roof. After the demolition of the old reinforced concrete roof, the substructure consisted of the dominant building and facade columns, as well as a continuous ring beam along the height of the eaves. To change the original appearance of the stadium as little as possible, the roof structure was to be kept low at the outer rim and the roof shape was to be floating flat over the stadium bowl. This was achieved by the design of a cable-net roof, which is based on the design principle of a spoked wheel. The combination of a continuous outer compression ring with a pre-stressed cable-net, inner tension rings and radial connection cables forms a stable roof slab which can transfer pressure and suction forces, as well as horizontal loads.

For the Estádio Jornalista Mário Filho, a new version of this type of structure has been developed. In this construction a flying strut holds the upper and lower radial cable arrays in place. The cable arrays emanate from the compression ring at a roof depth of approximately two thirds, to meet again at the inner edge of the roof. This creates “kite-shaped” cable trusses with one compression ring and three tension rings at the corners. The upper and the lower cable arrays are tensioned against one another by so called hangar cables in order to transfer the compression and tension forces into the activated suspension cable.

The existing building geometry has been projected to the roof structure. Thus, the 60 roof axes (radial cable trusses) follow the same basic layout as the 60 support axes forming the basic geometry. According to the basic principles of the ring shaped cable-net roof, the course of the ring cables in the horizontal projection matches the position of the compression ring. This forms an interior opening of 160 x 122 m at a constant roof depth of 68 m. The strutting of the radial cables, at the height of the flying masts, remains unchanged at 13.5 m.

Along the elevation, the flying masts are strutted in the same way as the radial cables. Thus, they trace the circumferential catwalk, which houses the entire technical equipment of the roof, the floodlights, the effect and grandstand lighting, as well as the sound system including all installations. All catwalks and technical equipment have been designed in detail, so that the catwalks melt into the background of the roof.

The roof is clad with a textile membrane, which spans between the upper radial cables. To bestow the double curvature upon the membrane surface, for the benefit of stability, a radial, shaping valley-cable has been added. One such cable is positioned in the centre of each of the 60 roof spans. This serves to keep the membrane against the main radial cables. Thus, in the axis of the flying masts the valley cable is stayed against the lower tension ring. This serves to create low points at these roof positions. Overall, the membrane forms a folded structure between high and low points.

Prior to the installation of the cable structure, a computational verification of all individual steps is required. Furthermore, this structure demands expertise in dealing with high-tensile cables and the respective hydraulic jacks. The roof structure of Maracanã poses a twofold challenge. Firstly, a structure with three ring cables has to be lifted all at once. And secondly, the same configuration of strand-jacks has to be used for all the individual tensioning stages (lifting of the upper radial cables, tensioning of the lower radial cables) without repositioning them in between.

Conclusion: As a light-weight structure, the new roof for the Estádio Jornalista Mário Filho is not only an efficient solution for the assigned task, but it is also an approach which handles the original building and its significance with great caution. Unobtrusively, it spans the stadium at a gentle slope, and through its folded shape, it restates the original roof’s radial accentuation of the cantilevers.