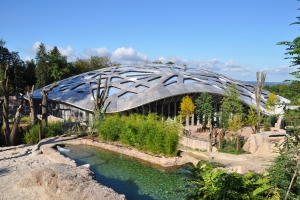 On 7 June 2014, the Kaeng Krachan Elephant Park was opened at the Zurich Zoo. In addition to the impressive elephant house, the new park also includes a large outdoor area for the animals and has been design ... [more] 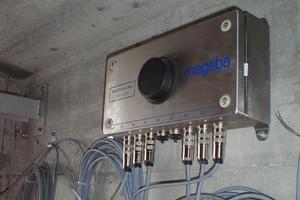 At Zurich Zoo, a breeding group of Asian elephants is to be shown in a behaviorally appropriate manner in a contemporary facility that corresponds to today's zoophilosophy. The animals are to live in a landscape that mimics their original habitat and involve visitors in the outdoor and indoor facilities.

The replication of the elephants' original habitat should be made possible with landscape design that avoids, in perception, any distraction of the visitor to visible European construction elements and architecture that contrasts with the landscape.

Description of the main supporting structure

Above an irregularly circular hall with a floor area of approximately 6,000m², a wooden roof structure with a diameter of 85m spans the stables and a generous indoor facility as a cantilevered shell structure perforated by 271 skylights. Due to the limited permissible construction height and the variable height of the roof edge, the supporting forces are transferred via a circumferential prestressed concrete ring beam into concrete components already required by the use as local abutments. The actual load-bearing shell structure consists of three layers of 80mm thick cross-laminated timber panels that are twisted together by approx. 60° and nailed together to form a homogenized and ductile shell hybrid material.

The choice of building material for a shell structure does not only fit the theme given by the zoo for design reasons. The poor foundation soil was just as much a reason for the lightweight and thus more economical roof structure made of wood. Thanks to current and specially advanced developments in the planning and production possibilities of cross-laminated timber, it was possible to efficiently implement the construction of a double-curved supporting structure made of flat individual elements. The wall plates of the local roof foundations supporting the shell are vertically post-tensioned with DYWIDAG bars.

Explanation of the design

The choice of a shell as a roof form follows the requirement of a natural construction as well as the pursuit of a minimized building volume that dominates as little as possible in the Elephants Landscape Park. The possibility of static optimization by means of form finding of the roof edge and the free form itself meets the design ideals and leads to a fusion of the intended image and constructive reality.

The arch heights between the supports result from architectural specifications, such as the intended visitor views, the heights of doorways, and the size of the elephants.

In interaction with the architectural organization of the use and the resulting logical design of the glass façade, the boundary conditions to be taken into account for the supporting structure resulted, such as the arrangement of the vertically abutting elements at the low areas of the roof edge. Care was taken to use only components that were necessary anyway, such as the round outer wall of the management area as a linear support. Rainwater cisterns were integrated into the underground media channel and designed as local roof abutments. These local areas are resolved into individual cantilevered piers that integrate into the organically uniformly changing principle of the facade supports.

The project site is located on a slope, which is why the building with its basement dug into the slope and the base plate of the technical center in the basement is located in the rock, while on the valley side the local abutment areas partly require no excavation at all and are located on layers with low load-bearing capacity and susceptible to settlement and transfer the loads by means of large-bore piles and permanent anchors.

The supporting structure represents as a visible construction the project idea of the park, an artistic image of nature as a tangible (living) space for elephants and visitors. In the process, wood as an anisotropic and inhomogeneous material is specifically used via specially developed form-finding and leveling processes in the form of the modern building material cross laminated timber in combination with a two-dimensional nailing to create a ductile and robust sheet supporting structure. There are only two rule details for the roof. The whole construction could be planned parameterized spatially by means of project-specific BIM with the help of consistent construction rules and produced from this directly with the corresponding interface with robots at the contractors. As a hybrid structure in combination with prestressed concrete for ring beams and abutments, it was possible to realize an efficient, material-reduced and thus sustainable structure for the client, despite the flat spur and suboptimal shell edge required by building law.

What are the positive effects of the special engineering performance?

Modern zoological gardens see themselves as nature conservation centers and therefore, in addition to species-appropriate animal husbandry and breeding, want to use educational and scenographic aids to point out grievances in animal and environmental protection. The new elephant park, and in particular the shell roof, has led to an enormous increase in the number of visitors since its opening, in addition to the inhabitants themselves. Thus, in one of the most visited places in Switzerland, not only animal and environmental protection, but also architecture and engineering can be communicated to a large audience. The facility is perceived and experienced as the result of a close and intensive collaboration between architect, landscape architect, civil engineer as well as executing contractors.

This content and additional features are fully available only with

Structurae Plus subscribers can download 30 media files or data sets per month.

Structurae Pro users are limited to 50.