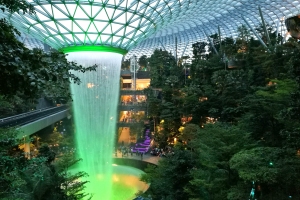 Singapore has put a gem into its architectural crown, the “Jewel Changi Airport”. The largest single-layer steel-glass construction and the world’s largest indoor waterfall – both resting on 14 spherical bearings.

Jewel Changi Airport (also known as Jewel or Jewel Changi) is a nature-themed entertainment and retail complex on the landside of Changi Airport, Singapore. Linked to three of its passenger terminals, the centrepiece is the world's tallest indoor waterfall, named the Rain Vortex, which is surrounded by a terraced forest setting.

Jewel is located in Changi, at the eastern end of Singapore, approximately 20 kilometres northeast from Singapore's Downtown Core.

Jewel was conceived to maintain Changi Airport status as a major aviation hub in the Asia-Pacific. It was first mentioned by Prime Minister Lee Hsien Loong in his National Day Rally speech in 2013 as part of Changi Airport's long-term plans to double its capacity by the mid-2020s and "create more opportunities for Singapore and Singaporeans".

Built over the former open-air car park in front of Changi Airport Terminal 1, Jewel expanded Terminal 1's arrival hall and baggage claim areas by 70%, and its handling capacity is also expected to increase from 21 to 24 million passengers a year.

Jewel's toroidal glass-and-steel façade was designed by a consortium of architects, led by Moshe Safdie, who also designed Singapore's Marina Bay Sands. Renowned local firm RSP Architects Planners & Engineers were the executive architect and structural engineers. The landscape architect was Peter Walker and Partners, who co-designed the National 9/11 Memorial and worked with Safdie on the landscaping of Marina Bay Sands. Benoy were the interior designers; BuroHappold Engineering were responsible for the façade and Lighting Planners Associates handled the lighting. The Rain Vortex was engineered by water design firm WET Design. It has a 360-degree light and sound show projected onto it.

Jewel was envisioned to combine a marketplace and an urban park. "The component of the traditional mall is combined with the experience of nature, culture, education and recreation, aiming to provide an uplifting experience. By drawing both visitors and local residents alike, we aim to create a place where the people of Singapore interact with the people of the world," said Moshe Safdie, the lead architect.

The glass panels of the dome are framed in steel which rests on a complex latticework. At night, the glowing beautiful dome would be visible from all surrounding areas.

A collaboration of Shiseido and teamLab from Japan, the Shiseido Forest Valley (資生堂フォレストバレー, Shiseidō Foresutobarē) is one of Asia's largest indoor gardens, spanning five stories and approximately 22,000 square meters located in the heart of Jewel Changi Airport. It houses around 3,000 trees and 60,000 shrubs of 120 species that live in high-altitude tropical forests from around the world.

Sponsored as HSBC Rain Vortex, it is the world's largest and tallest indoor waterfall, standing at 40 metres (130 ft) high. Rain water is pumped to the roof to free fall through a round hole at up to 37,850 liters (8,330 imp gal; 10,000 U.S. gal) per minute to a basement-level pool. An acrylic funnel prevents splashing and insulates the sound of the cascade. The toroid-shaped roof has more than 9,000 pieces of glass spanning 200 by 150 meters. At night, the circular walls of the waterfall becomes a 360-degree stage for a light-and-sound show.

The train connecting the terminals passes above ground near the waterfall, allowing passengers remaining airside to see the Vortex and Jewel.

At the topmost level of Jewel, the 14,000 sq m Canopy Park houses recreation and leisure attractions. About half of the total landscaping is hosted at Canopy Park, including two gardens: Topiary Walk and Petal Garden. The Topiary Walk features animal-shaped topiaries at every corner, while the Petal Garden will have seasonal floral displays.

The park includes a suspension bridge called the Canopy Bridge that is located 23 metres above the ground which offers a panoramic view of the Rain Vortex. At 50 metres long, the Canopy Bridge also has a glass panel flooring at the centre section that offers a view through to level 1 of Jewel.

The park also consists of two mazes, situated at the eastern end of the Jewel called the Hedge Maze and Mirror Maze. The Hedge Maze is Singapore's largest with hedge walls standing at 1.8m high. The maze features gates that can be pushed within that will change the path of the maze. It ends at an elevated watchtower that offers a bird's-eye view of the entire maze. The Mirror Maze is located under the dome with plants branching across the top of the maze. The maze makes use of mirrors and various reflections.

The Sky Nets, also called the Manulife Sky Nets for sponsorship reasons, provide children's play facilities, including a Bouncing Net and a Walking Net. The Bouncing Net is 250 metres long, suspended 8 metres above ground at its highest point. A separate 50-metre long Walking Net enables visitors to look down 25 metres to Jewel's Level 1.

The Discovery Slides feature four integrated slides: two tube slides and two sliding surfaces. The entire structure sits at an incline, 3m high on one end, and close to 7m on the other, and enables visitors to view the Forest Valley and the Rain Vortex. The Discovery Slides were designed by Carve and built by Playpoint in Singapore.

The Foggy Bowls are four concave bowls with depths of between 30 cm and 65 cm for people to jump in while mist is released to create an illusion of playing among clouds.

The Changi Experience Studio is a 3,000 square meter space with interactive games and displays relating to Changi Airport's history and allows visitors a behind-the-scenes look of how the airport is run.

Purchasing a ticket is required to enter the Canopy Park, priced at S$4.50 for Singaporeans and S$5 for non-residents, with additional costs for each of the mazes, bridge, nets, and experience studio.

A 130-room hotel is based within Jewel and is operated by international hotel brand, YOTEL. It opened on 12 April 2019.

Early check-in facilities enable passengers to check-in and drop off luggage up to 24-hours ahead of regular check-in times. There are dedicated facilities for fly-cruise and fly-ferry passengers.

Jewel houses both local and international brands, 11 of which are larger duplex stores at Level 2. Anchor tenants include the largest Nike store in Southeast Asia, the second Apple Store in Singapore, Marks & Spencer, Muji, Zara, Uniqlo, an 11-screen Shaw Theatres IMAX cinema with a seating capacity of 800 and Five Spice, a food court by Food Junction with 19 unique stalls and supermarket chain FairPrice Finest.

Text imported from Wikipedia article "Jewel Changi Airport" and modified on 07 October 2019 under the CC-BY-SA 3.0 license.